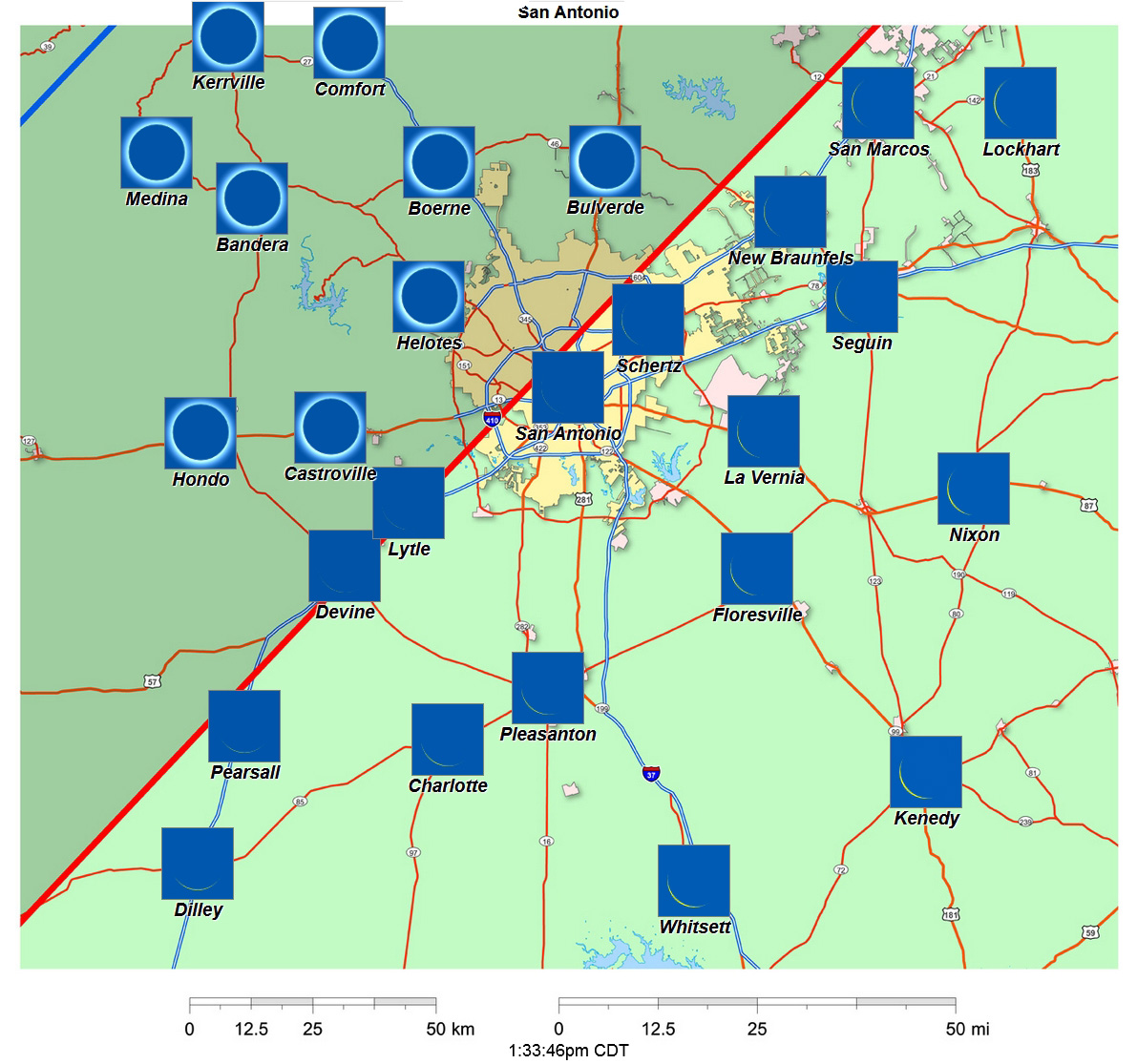 Map of the San Antonio area, showing the path of totality in gray. 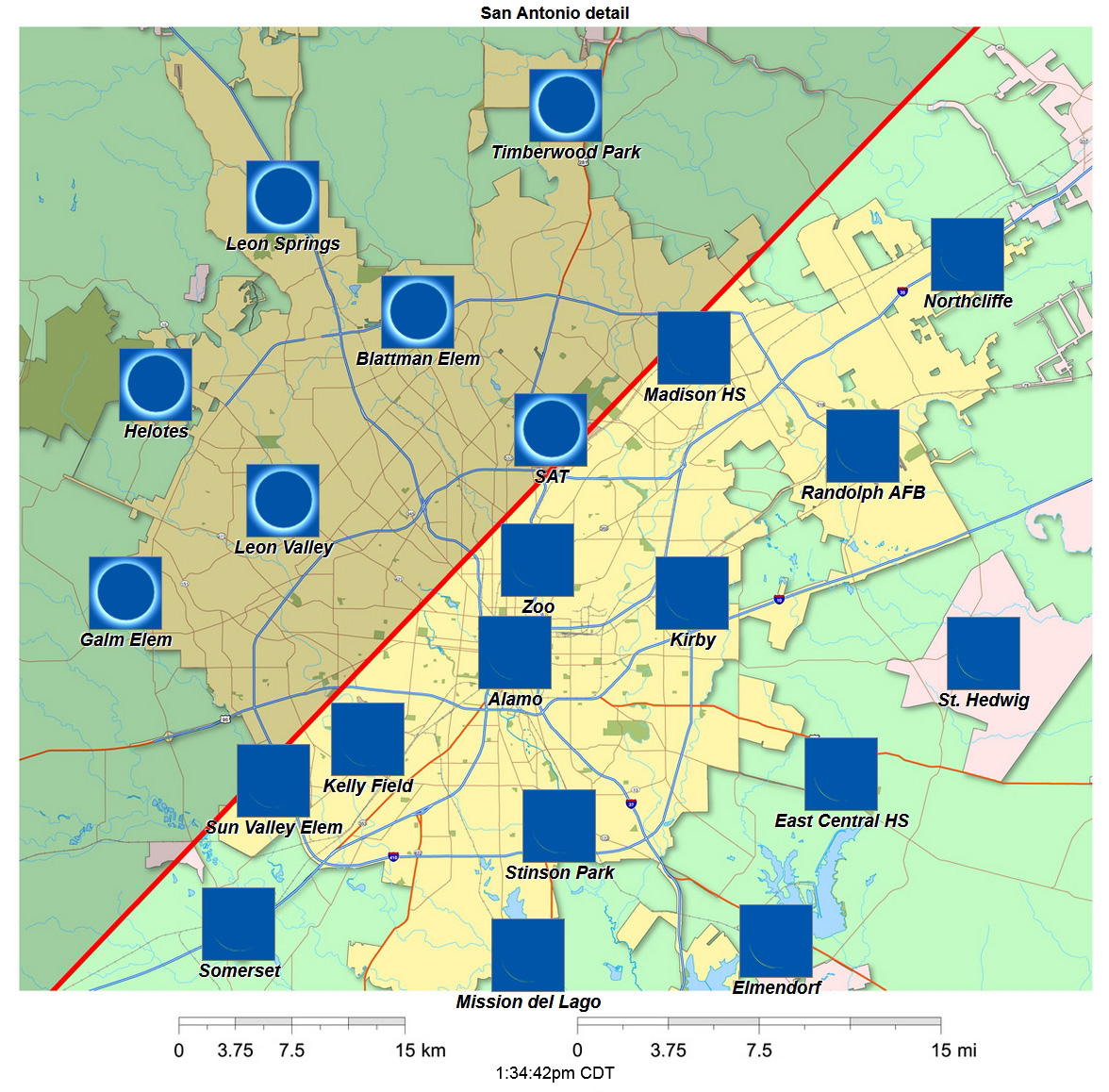 Detailed map of the San Antonio area, showing the path of totality in gray.

In much of San Antonio, you must ALWAYS use your eclipse glasses to view the eclipse.

This blog post will tell you about the 2024 eclipse as seen from the San Antonio area in Texas. Please check out all the links we’ve provided below to learn more about the 2024 total solar eclipse from other locations.

This blog post will tell you about the 2024 eclipse as seen from the San Antonio area in Texas. Please check out all the links we’ve provided below to learn more about the 2024 total solar eclipse from other locations.

The San Antonio is split in two by the southern limit of the path of totality for the April 8, 2024 total eclipse. This means that it is extremely important for you to know where to be on eclipse day, if you want to see the amazing sight of totality!

Because of San Antonio’s location on the edge of the path, and the size of the metro area, it’s very important to understand that the farther north and west you go, the more totality you’ll see.

If you’re downtown, you will NOT be in the path! The terminal at the main airport will be in the shadow for less than a minute. On the northwest side, at the interchange of I-10 with the 1604 loop, you’ll see well over two full minutes! That’s a lot of difference, depending only on where you’re located in town!

We have blog posts for the Piedras Negras and Austin areas, in case you’d like to extend your viewing options.

Please note that New Braunfels and San Marcos are NOT in the path. You’ll need to get farther northwest of these towns to be in the path. 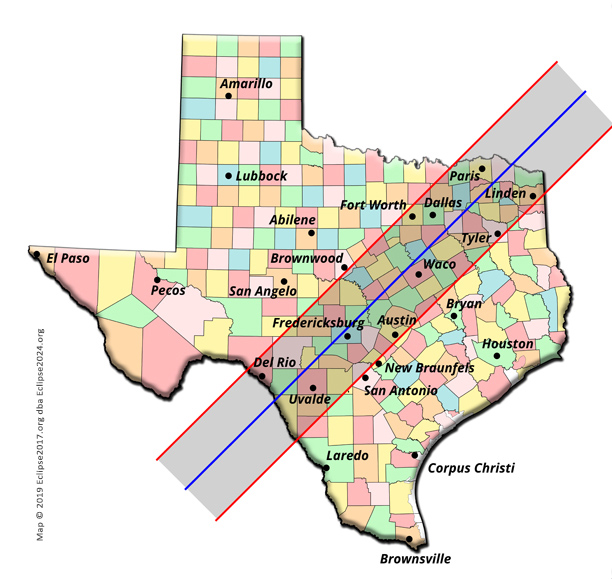 It’s very difficult to describe exactly what you’ll see on eclipse day, because each part of town will see something different. It’s true that from locations just outside the path there will be sky darkening, some possibly interesting edge effects, and maybe even a bit of corona.

However, if the Sun is not COMPLETELY eclipsed you MUST always use ISO-certified eye protection ("eclipse glasses") to watch the eclipse. That means that, even if these things are going on around you, if you’re not in the path you won’t be able to see most of them. It will be best for you to get as far north and west as possible, to make sure you’re in the path and will be able to see totality.

Whatever the eclipse brings to San Antonio, it will be most interesting as the shadow passes by – to the north and west of town, remember.

This will happen at about 1:34pm CDT.

Again, it’ll be best if you try to get farther north to make sure you have a great view of the eclipse.

The eclipse happens at different times in different locations. Use the slider on the map above to show you when totality will happen as the eclipse passes through the San Antonio area.