Home Learn about eclipses Other Types of Solar Eclipses

Other types of solar eclipses

They aren’t all just total or partial!

(It is very important to note that ALL the solar eclipses we discuss have partial phases, and locations on Earth from which ONLY the partial phases will be visible. This means that no matter what type of eclipse you’re watching, if it’s a SOLAR eclipse, you need to have ISO-certified eclipse glasses on hand for those partial phases!)

The eclipse of 2024 is a total eclipse, and is neither annular nor hybrid – so this discussion doesn’t really pertain to it. But knowing about these other types of eclipses will help us understand more about how eclipse circumstances are calculated. And you’ll be all set with knowledge about the HUGE Annular Solar Eclipse and Hybrid Solar Eclipse that will grace our planet during and 2023, as well as the beautiful sunrise annular eclipse of 2021!!

Let’s first go back to this short video clip of the Moon’s shadow (the “umbra”) moving across the face of the Earth as the Moon moves in its orbit:

We’ve taken our place far above the North Pole of the Earth, and so the Moon’s left to right motion in its orbit is shown here as “top to bottom”. We see the Moon’s shadow cone passing through space, then hitting the Earth (beginning the total eclipse), and then moving across the face of the Earth to exit off the other side and back into space.

Note the white dot that we’ve put at the tip of the Moon’s shadow cone. The dot will serve as a reference point as we watch our other video clips. All you need to know for right now is that the white dot “passes through” the Earth – taking a path that is on the other side of the Earth’s center as compared to the Moon.

Now, let’s imagine a situation where the Moon is much farther away from the Earth than in the previous case. Diagrams are not to scale, so it’s tough to explain how this can happen – but suffice it to say that the Moon’s distance from Earth is highly variable over the course of time. At some eclipses, the Moon can be much closer to or farther away from Earth than for other eclipses. When the Moon is near its maximum distance from Earth, we can have this situation:

This time, that white dot never touches the Earth; its path takes it not only on the “Moon” side of Earth’s center, but it passes far above Earth’s surface at all times.

What does this look like for an observer on Earth? Well, the Moon in this case looks too small to ever cover up all of the Sun. No matter where you are on Earth, you’ll never see ALL of the Sun covered. But if you are in the path that the red shadow outline makes on the surface of the Earth (called the “path of annularity”), you’ll see an Annular eclipse. This eclipse looks like a ring (thus the name “annular”, from “annulus” or “ring” in Latin), and this gives rise to the common name for an annular eclipse: a “Ring of Fire”.

An annular eclipse will occur on October 14, 2023, and will bring this Ring of Fire to observers in the Western and Southwestern US, Central America, Colombia and Northwestern Brazil. Eclipse2024.org is providing information, community pages, and the full-featured eclipse simulator for the 2023 annular eclipse, which will be visible in the Western USA, central America and northern South America on October 14, 2023.

Now for the third type of eclipse – the most rare* – called a “Hybrid” eclipse. In this case, the white dot at the umbral tip passes through the Earth, but on the Moon side of Earth’s center. This slight distinction from the total eclipse situation is very critical, because it means that on the extreme edges of the eclipse path (due to the curvature of the Earth), the eclipse is not total. Here, the white dot is outside the earth, and the shadow that’s being cast by the Moon begins the day by creating an annular eclipse like we just saw. But then, at what’s called the “transition point”, that white dot enters the Earth and the eclipse immediately changes into a total eclipse! The eclipse then carries on along the path like any other total eclipse, until another transition point is reached, the white dot leaves the Earth, and the eclipse ends as an annular.

The spacing of the Earth and Moon have to be exactly right for this type of eclipse to occur, as you might expect. And it’s important to note that anyone situated in the path of totality between the two transition points will see a regular total eclipse. It’s impossible for one person to see BOTH the annular and total phases of a hybrid eclipse, because the only way to move faster than the Moon’s shadow to get from one spot to the other is in a supersonic aircraft or the Space Station – and the military and NASA have better things to do with their vehicles than chase eclipses!

You could try to observe the eclipse exactly AT one of the transition points, but we know what you’d see – a beaded annular eclipse: 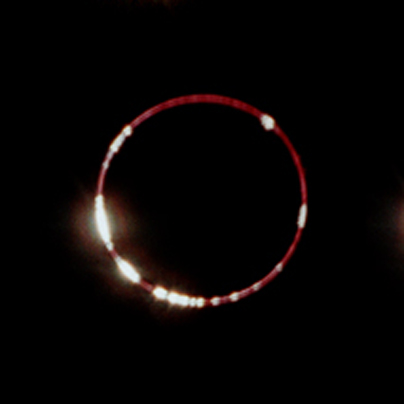 Edge effects guarantee that there’s really no spot you could observe from that would let you see a total eclipse where the Moon and Sun were exactly the same size. (There is a great story from eclipse chaser Glenn Schneider about this type of observation attempt during the 1986 eclipse, above Helsinki Finland.)

For most people, it’s enough to know that they are seeing a very special eclipse when they view a hybrid eclipse – and one is coming to Earth, on 20 Apr 2023! You will have to be in Indonesia, or on a tiny spot in far western Australia, to see the total phase of this eclipse!

A final note about hybrid eclipses: Many astronomical purists do not like the term “Hybrid”, because a person can really only see the total or the annular phase of this type of eclipse from the path. These people argue that the eclipse is at all times one or the other – it is not truly “combined”, as the term Hybrid might suggest – and they prefer the term “annular-total”. Call it what you want, but “Hybrid” has been around for a long time, and is not likely to go away any time soon.

*Actually, the MOST rare eclipses are called “non-central” total or partial eclipses (explanations of which lie outside the scope of this site), and even rarer than that are (theoretical only) non-central eclipses featuring simultaneous annular and total observation locations! If you’re really interested in reading more about this exceedingly rare eclipse type, we’d suggest Jean Meeus’ masterful Mathematical Astronomy Morsels, vol II (Chapter 20) and Morsels IV (chapter 19).