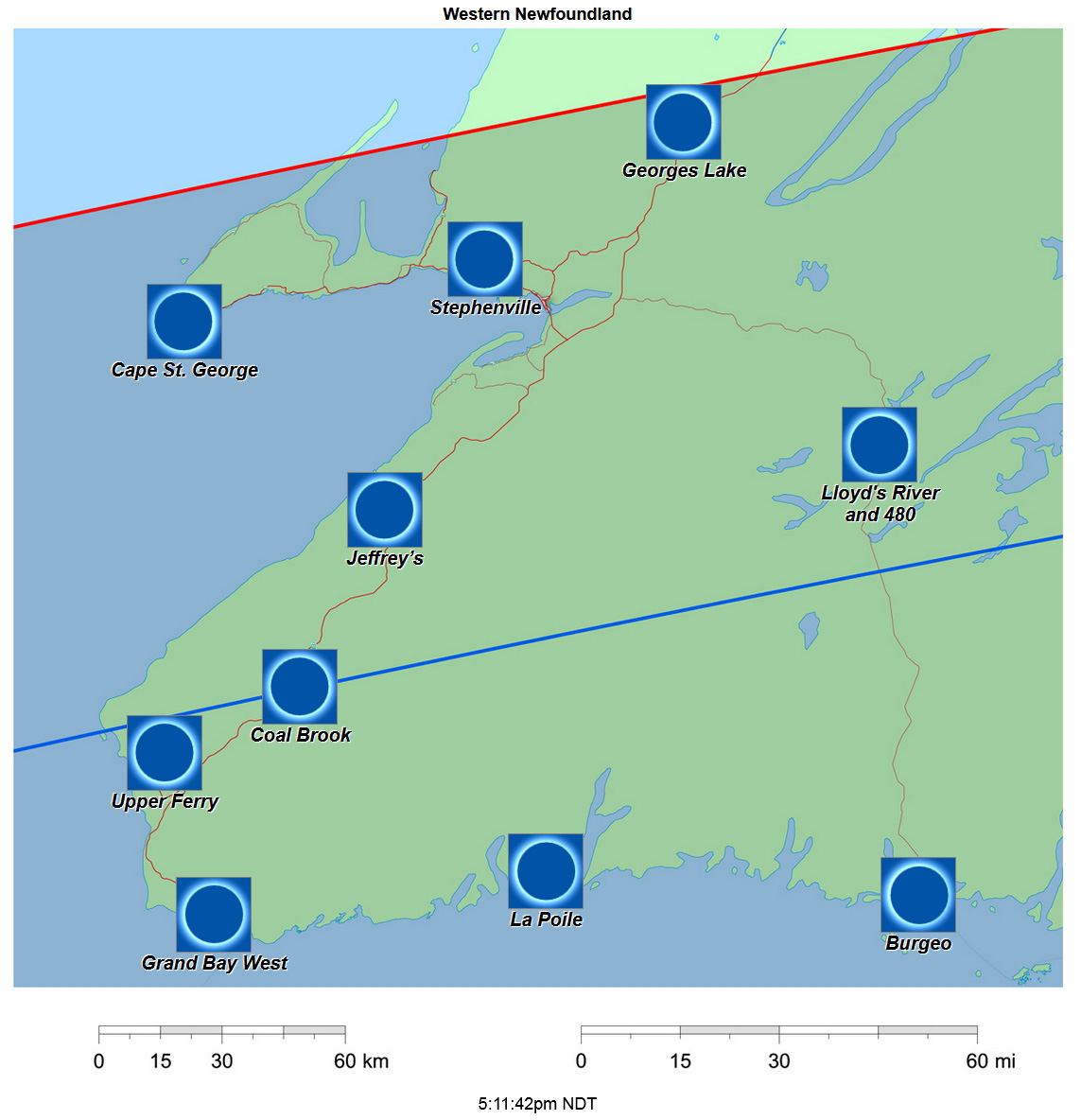 Map of the Western Newfoundland area, showing the path of totality in gray

This blog post will tell you about the 2024 eclipse as seen from Western Newfoundland. Please check out all the links we’ve provided below to learn more about the 2024 total solar eclipse from other locations.

This blog post will tell you about the 2024 eclipse as seen from Western Newfoundland. Please check out all the links we’ve provided below to learn more about the 2024 total solar eclipse from other locations.

The Total Eclipse of April 8, 2024 in Newfoundland

Much of Newfoundland lies squarely in the path of totality, but the centerline passes through some largely uninhabited areas. The south coast, as well as some towns nearer the Trans-Canada, lie near the path limits, and some larger cities lie outside the path completely. That means it’s very important you know where the path is, to help you plan your eclipse-day viewing. The map shows you all you need to know, but we’ll give a few highlights below.

The path travels from west to east through the province, with a slight northeasterly tilt. Most of the roads in the path are north-south. This means you really have to watch the weather and plan which locations you’re going to prioritize, because it’ll be very tough to get from one to the other on eclipse day!

The centerline crosses the north-south portion of the Trans-Canada just a bit north of South Branch, and this location will get you just a bit more than three minutes of totality. If you find that you have to escape weather, your options lie to the north or south. You can basically head anywhere to the south coast and still be in the path, but the more you drive away from centerline, the less totality you’ll get. Doyle’s Station and St. Andrew’s still see over three minutes of totality. Grand Bay gets 2m 45s, and even as far along the coast as Burgeo, you’ll still get 2m17s in the shadow.

If you head north, then you have a lot of other good options for viewing the eclipse. You don’t leave the path until about 15km south of Corner Brook, so anywhere that’s got good weather will be a good location, provided you can stop safely off the road. McKay’s gets 2m50s of totality, and Stephenville sees just over two minutes (as does Cape St. George, in case you’d like to be among the first folks to welcome the shadow to this part of Newfoundland!). Once you’re up at Gallants, totality has slipped to under a minute and a half, so we woudn’t recommend being north of here on eclipse day. 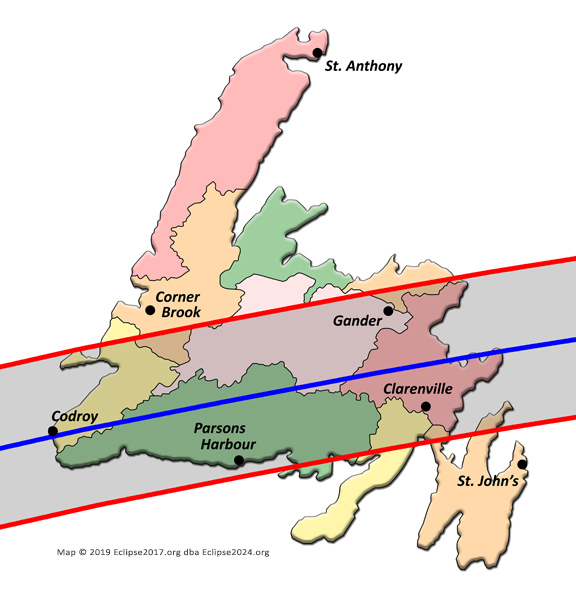 It’s very difficult to describe exactly what you’ll see on eclipse day, because each part of the region will see something different. Please note that the big locations of Corner Brook, Deer Lake, and Farmington are not in the path! You will need to be well south of there on eclipse day to see totality. People who are in towns like these will see a very deep partial eclipse, with sky darkening and possibly some interesting edge effects. But there will be no corona, no totality, and no dramatic moments on eclipse day. It’s true that "close" just isn’t close enough when it comes to a total eclipse!

However, if the Sun is not COMPLETELY eclipsed you MUST always use ISO-certified eye protection to watch the eclipse. That means that, even if these things are going on around you, if you’re not in the path you won’t be able to see most of them. It’s certainly true that any type of eclipse is an exciting event, but we’d like to encourage you to make it into the path if at all possible on eclipse day. What you’ll see there (vs. back home outside the path) will be literally the difference between night and day!

The map above will show you roughly when the eclipse will be happening. Exact details for MANY more locations are available on our 2024 eclipse cities pages.