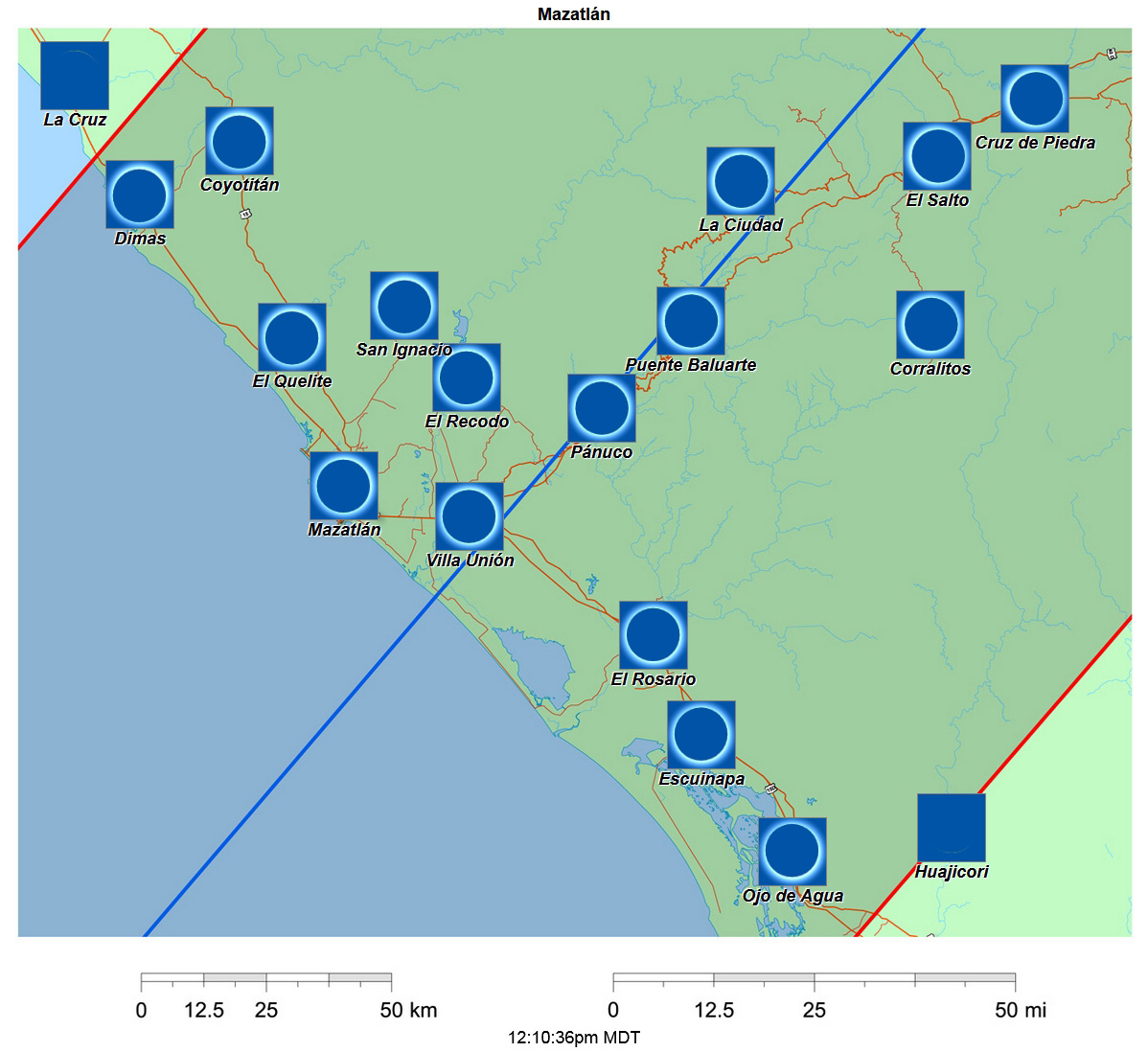 Map of the Mazatlan area, showing the path of totality in gray

This blog post will tell you about the 2024 eclipse as seen from the Mazatlan area in Sinaloa, Mexico. Please check out all the links we’ve provided below to learn more about the 2024 total solar eclipse from other locations.

This blog post will tell you about the 2024 eclipse as seen from the Mazatlan area in Sinaloa, Mexico. Please check out all the links we’ve provided below to learn more about the 2024 total solar eclipse from other locations.

Totality enters the Mexican mainland just southeast of Mazatlan. The city itself is just northwest of the centerline, and is a great place to watch totality!

The eclipse happens at different times in different locations. Use the slider on the map above to show you when totality will happen as the eclipse passes through the Mazatlan area.

Mazatlan is very close to the centerline, so it’s not as critical that you relocate in order to maximize totality. The center of town will see 4m 15s of totality! It is true that you will see a bit more totality if you are in the southeastern part of town. For example, the resort at Quintas del Mar will see 4m 7s of totality, while at Playas del Sur people will see 4m 18s! Eleven more seconds of totality will seem worth the drive to you, once you see the eclipse!

If you want to be on the centerline, you can travel down Road 150 or 15. The centerline is between Villa Unión and Agua Caliente de Garate. You’ll get about 8 more seconds of totality than if you stay put in the eastern part of Mazatlan.

If you’re as far north as Dimas, you’re still within the path, but you’ll only see about two minutes of totality. That’s how much difference there is in such a short distance! Please try to be as close to the centerline on eclipse day as possible!

Road 150 gives you great mobility perpendicular to the path of totality, but if you want to try to outrun coastal clouds you can always travel northeast on roads 40 or 400. Those roads basically follow the centerline all the way up the mountains until they meet at Las Adjuntas. 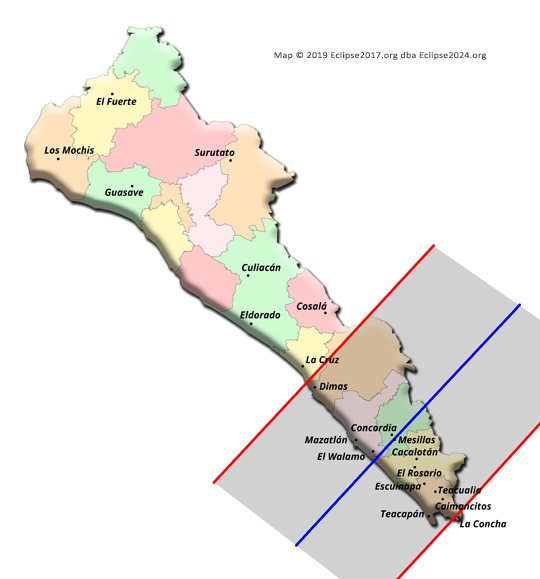 Because Mazatlan is so well situated, if you leave town you’re only going to get less time in the shadow. If you have to escape clouds, then see the map above for other great options. There are plenty of great places you should be able to watch the eclipse from!

Mazatlan is very well-placed, and will be an excellent place to see totality!

The total eclipse begins just before 12:07:30pm MDT, and people in the downtown area will see about 4m 15s of totality.

Please note that Sinaloa begins Daylight Saving Time on April 7 – the day before the eclipse! Make sure you have your clocks moved ahead an hour to MDT on eclipse day!

The eclipse happens at different times in different locations. Use the slider on the map above to show you when totality will happen as the eclipse passes through the Mazatlan area.