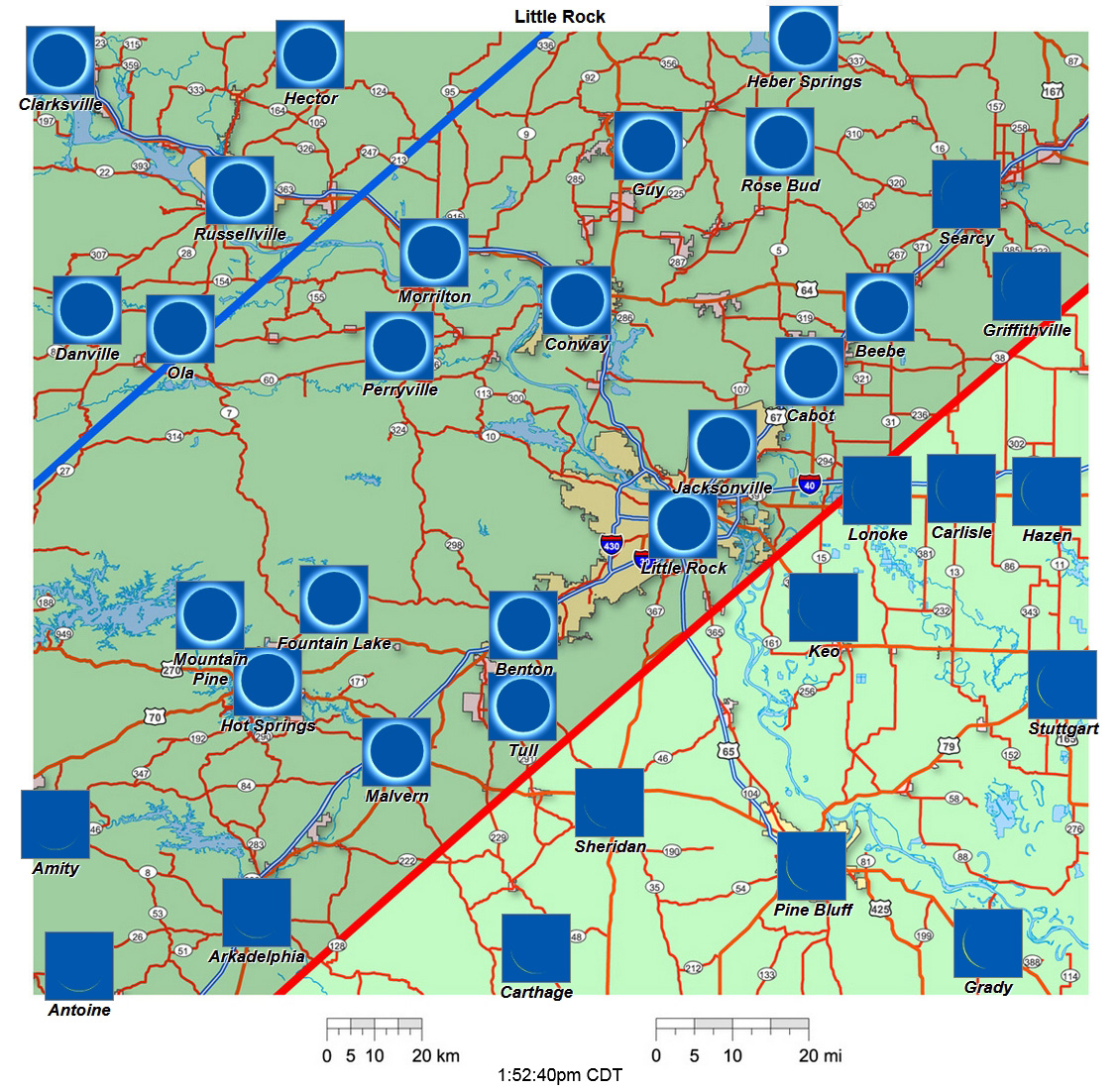 Map of the Little Rock area, showing the path of totality in gray. 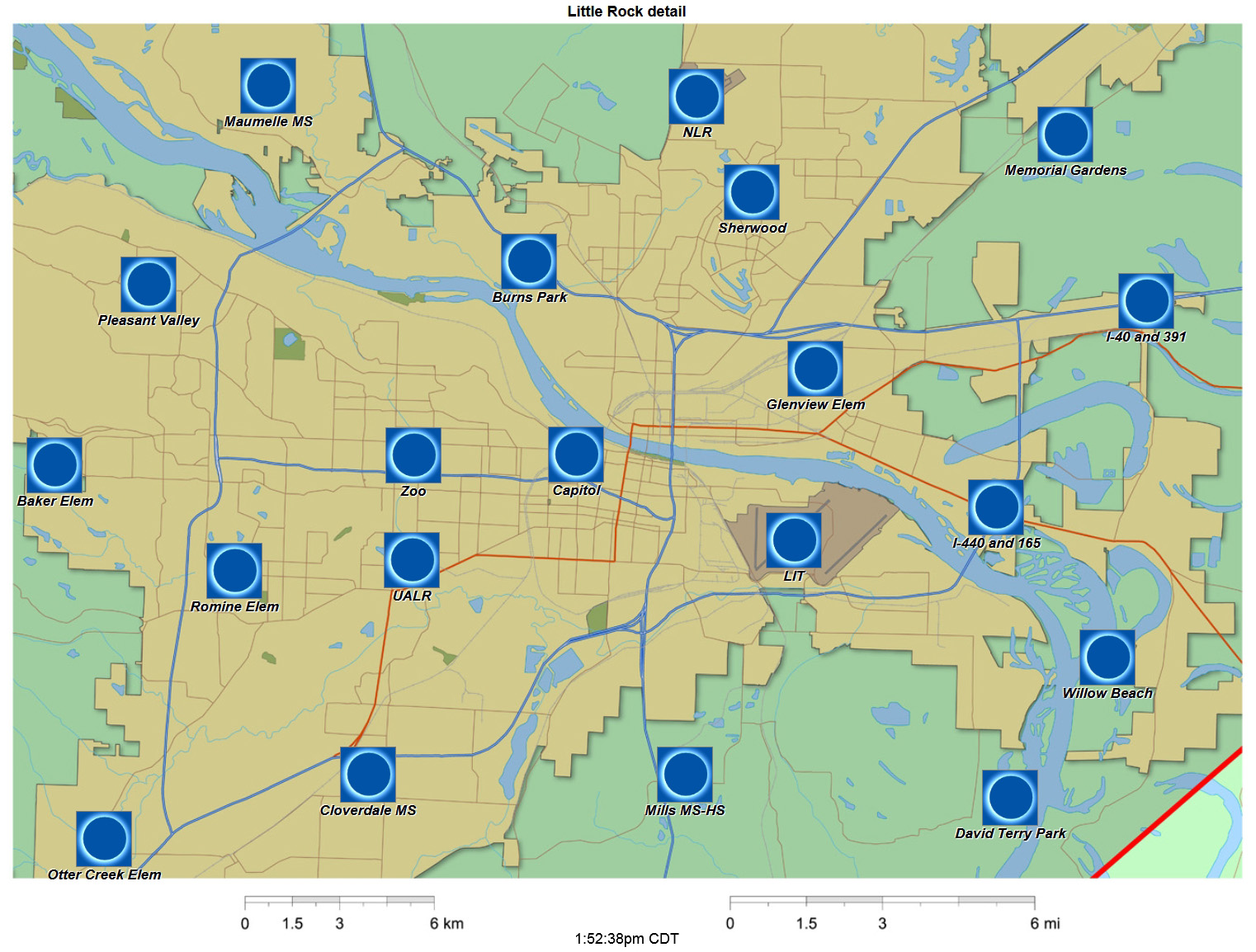 Detailed map of the Little Rock area, showing the path of totality in gray.

This blog post will tell you about the 2024 eclipse as seen from the Little Rock area in Arkansas. Please check out all the links we’ve provided below to learn more about the 2024 total solar eclipse from other locations.

This blog post will tell you about the 2024 eclipse as seen from the Little Rock area in Arkansas. Please check out all the links we’ve provided below to learn more about the 2024 total solar eclipse from other locations.

Little Rock lies just inside the path, and so is very well-placed to see totality! Though not as deep into the path as we’d like, the downtown area will still get a very respectable two-and-a-half minutes of totality.

Because of Little Rock’ location in the path, it’s very important to understand that the farther north and west you go, the more totality you’ll see. So for example, at the airport, totality will last about 2m10s. At the “Little Rock”, it’s about twenty more seconds. At the Lake Maumelle dam, we increase to almost three and a half minutes in the shadow. That’s a big difference, just based on your location within the city!

To get more totality, you’ll want to head northwest on I-40. Conway will get about 3m54s of totality, and Morrilton gets almost 20 seconds more. The centerline passes between Blackwell and Atkins on I-40, and gets about 4m15s in the shadow!

Any other direction you drive will not gain you as much extra duration of totality, so this is really your best bet. 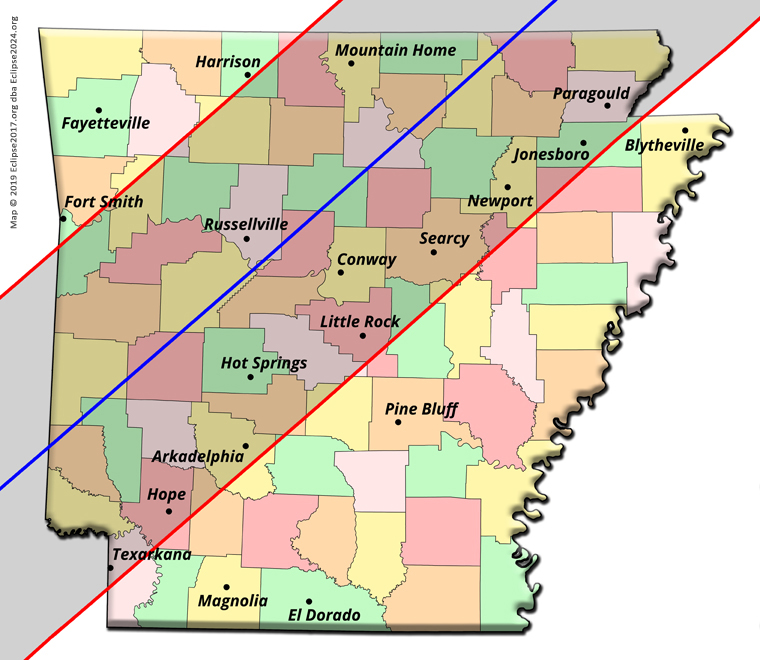 Though not right on the centerline, the downtown area will still get a very respectable two and a half minutes of totality!

However, if the Sun is not COMPLETELY eclipsed you MUST always use ISO-certified eye protection ("eclipse glasses") to watch the eclipse. That means that, even if these things are going on around you, if you’re not in the path you won’t be able to see most of them. It will be best for you to get as far north and west as possible, to make sure you’re in the path and will be able to see totality.

If you’re downtown, you’ll see about 2m 30s of totality, which is very respectable.

No matter whether you’re in the path or not, please remember the rule for using eye protection during an eclipse: If there’s ANY bright part of the Sun showing, then you have to use your eclipse glasses to watch the event.