Home 2024 Eclipse information for every city and town Mexico Ixtapaluca

The 2024 eclipse in Ixtapaluca, Mexico, Mexico


Xavier Jubier's interactive map of the path near Ixtapaluca


All eclipse circumstances have been calculated for each city using that city's latitude and longitude as sourced from public records. Eclipse2024.org has taken all reasonable measures to ensure the accuracy of the latitude and longitude shown; however, the user of any eclipse information on the Eclipse2024.org site should verify that these coordinates are correct for the intended viewing location. You can do this using web tools such as Google, latlong.net, lat-long.com or gps-coordinates.net. Please let us know if you believe the coordinates need to be updated for any city in our database.

The eclipse in Ixtapaluca will be partial (with magnitude 78%), and we’ve calculated the local circumstances (using the lat/long noted above and ΔT=69.0s), as follows:


View the instructions for the values shown in the table

In this table, we’ve listed the following information:

The times in the table have been calculated based on this exact location. Times can shift by several seconds as you get several miles/km away from the location shown.

All times are given in local time or Universal time [UT] (also known as GMT or Zulu time). You can convert the entire table by clicking on the time zone you want to see it shown in!

Where to look for that first “bite” of partial eclipse ("V")

We’ve called this value “V”, because that’s what astronomers call it. If you imagine the Sun’s disk as a clock face, this is the hour hand value of where to look on that “clock” to see that very first little bite that the Moon is taking! (Remember, you must use eclipse glasses to look at the Sun at this time!)

Who will be the first to see that bite and shout “First Contact!”?

This is when the maximum amount of the Sun's disk is covered. Also given in UT and you can convert it if you like.

This will let you know where the Sun will be in the sky during mid-eclipse, so you can check to make sure that trees, buildings or mountains won’t be in your way. (You can also go outside to your planned viewing location on the day before the eclipse at eclipse time and check it out yourself. The Sun’s location in the sky at that time won’t change enough in one day for you to notice the difference.)

Here are some helpful links to let you research the partial eclipse as it will be seen from Ixtapaluca:

A page of information about the plans that Ixtapaluca officials are putting in place for eclipse day!
Also includes links to weather and an Interactive Google Map.

Opens the amazing, full-featured eclipse2024.org eclipse simulator, to show you exactly what the eclipse will look like!
(If this is your first visit, you’ll want to open the Eclipse2024.org Eclipse Simulator Instruction page first!) 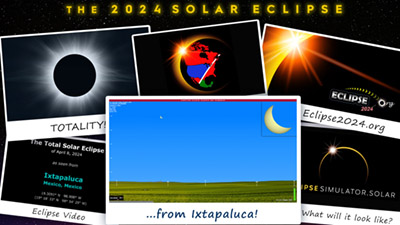 We’ve extracted a set of videos from the Eclipse2024.org eclipse simulator, to show you exactly what the total eclipse of April 8, 2024, will look like from over 2500 cities in North America! Watch the 2024 solar eclipse simulation video for Ixtapaluca on Youtube, and don’t forget to subscribe!
(You can also search all our videos on a map, or look them up by name!)

Eclipse2024.org is pleased to offer you a complete set of information for the annular eclipse of October 14, 2023!
Visit our 2023 annular eclipse city page for Ixtapaluca to learn more about that eclipse.